So many mattresses on the street. In the middle of the street, on the corners. Dumped, folded, crooked up and sat awkward. Each one a soul, maybe two, and then all change. Why do people obsess about changing the mattress? They’ll use the same sofa, same kitchen, same furniture. But change the mattress! So they go out on the street, the sign of rentiers.  Life.

First up is Toad-Ally Snax Kanga Roos, which are chocolate coated pretzel nuggets that feature an interior butter pouch.  Hopefully you can see the connection between the naming of the snack and the design: kangaroos, in the wild, have ‘pouches’.  These particular ‘kanga roo snax’ have been tamed and filled with peanut butter goodness.  Thus nature is subverted to the will of Man.

They are actually quite nice : inoffensive chocolate and crispy salt pretzel that is then overpowered by the sweet/salt umami of peanut butter.  One or two is enough and then you feel a bit sick. 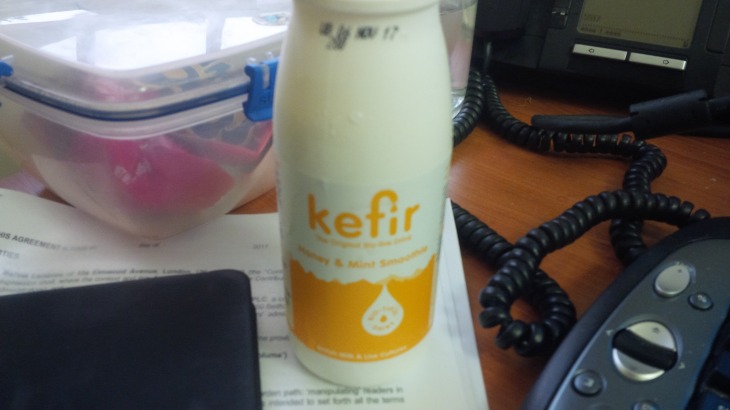 Also sampled was Kefir, now bottled and flavoured with (in this instance) ‘honey and mint’.  Kefir is fermented milk, and it comes from the family that gives us lassi and so on.  It’s an acquired taste, and this flavoured style is a bit like mango lassi – it’s lassi for people who would rather be drinking chocolate milk or some sort.  So, its fine, but really, you might as well just have a honey mint yazoo as the pro-active bacteria in something this size isn’t really going to be hugely helpful, and no doubt food safety regulations mean anything halfway helpful has been neutered.

I enjoyed it, but that enjoyment was tempered with many conflicting feelings, much like you might summarize my entire life so far.  I fear this is the path I am on until death, and after death, it will be too late to change.